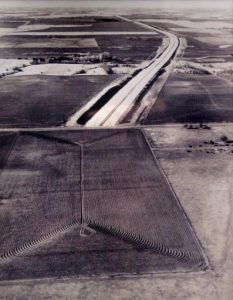 This is the southern terminus of the Kansas Turnpike as it existed in 1956, ending abruptly at the Oklahoma state line. There is an extremely dangerous at-grade intersection with E0010 Rd.

The Kansas Turnpike was the last of the great American superhighways to be built prior to the passage of the National Interstate and Defense Highways Act, which created the Interstate Highway System. These state toll roads greatly influenced the design of the system, but were not quite built to interstate standards. They were grandfathered into the system with some modifications. Notably, a median barrier had to be built over the entire length of the turnpike due to the median’s insufficient width.

The entire 236 mile stretch was built from scratch in 22 months, a feat that seems impossible by modern construction standards. Even more improbably, the highway was privately funded and all the right of way was acquired (via harshly applied eminent domain) in a matter of weeks.

The portion of the turnpike shown above was eventually closed, with all traffic forced to leave the highway at the South Haven interchange a few miles north. Crashes into Amos Switzer’s property immediately south of the state line had left his oat field covered with debris and tire treads. The Kansas Turnpike had no speed limit (other than “reasonable and prudent”) at the time.

After this stretch of road became part of I-35, Oklahoma was persuaded to continue the freeway on its side of the border, allowing the end of the turnpike to reopen. Today, I-35 passes under E0010 Rd., with no evidence remaining of the dramatic intersection that used to exist at this spot.